openbriefing.com Burey Gold Limited (ASX: BYR) has commenced an RC drilling programme across several targets within its 610km² tenement package at the Giro Gold Project, situated in the Kilo-Moto Greenstone Belt in northern DRC. The targets comprise two large soil anomalies that have been identified from sampling and artisanal workings at Douze Match and Mangote and there will be some targeted drilling on the Kebigada Shear Zone. Can you explain the style of the programme and what you are proposing to uncover in the scheme of the greater Giro Project? When do you expect the programme to complete and have results?

Exploration Manager Mark Gasson
Three drill fence lines have been planned (See Figure 1) across 1km of the coherent gold-in-soil anomaly in an area of extensive artisanal activity along the granite contact zone with banded iron formation (BIF) and volcanics where the Belgians mined historically. Holes will be drilled through the weathered zone until one rod of fresh material has been recovered with complete coverage across each drill fence. Mapping has shown that artisanal miners are recovering gold from a highly stockworked and quartz veined granite and from high grade quartz veins in bordering BIFs’. An outcrop showing similar silicification and sulphide mineralisation as that at Kebigada was also identified from mapping at Douze Match further confirming the potential for the area. The programme will target both the granites and BIFs’ over the best kilometre of the target which has a potential strike length of more than 4kms. Infill soil sampling programmes are ongoing to better define the strike extent of the current soil anomaly.
Mapping and soil sample field validation is currently ongoing at nearby Mangote where the 300m zone mined by the Belgians sits within a 1km long gold in soil anomaly. The extent of artisanal mining in this northern target area suggests there is good potential for new discovery in addition to the high grade shear mined by the Belgians. A shallow RC drilling programme will be planned for follow up once field work has been completed.
The 3,000m RC drilling programme should be completed at Douze Match within three weeks with first results expected by the end of June. 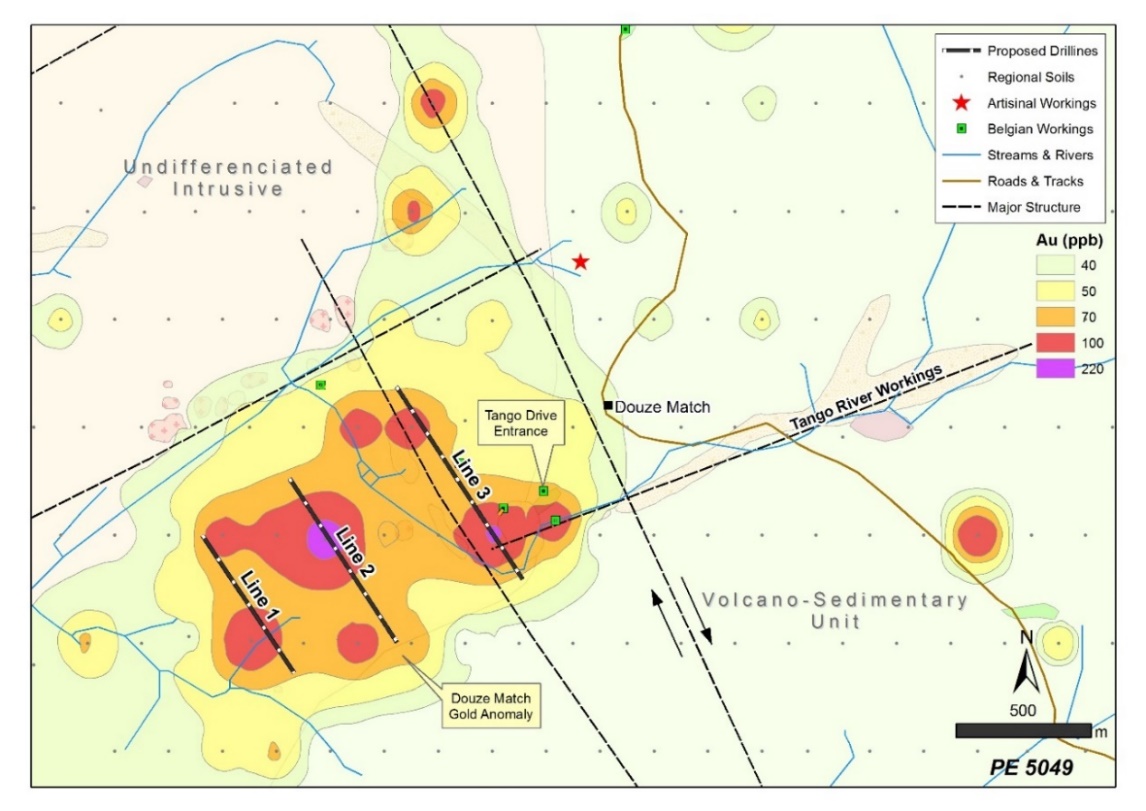 openbriefing.com
What is the history of the Douze Match and Mangote targets in terms of the previous Belgian mining operations? Is it possible that they are large enough to be standalone resources? What is the overall picture developing into in terms of project scope?

Exploration Manager Mark Gasson
Little is known of Belgian activities in the Douze Match area as no historic reports have been obtained. It is reported locally that the Belgians produced alluvial gold from the river bed at Douze Match and mined high grade quartz veins from their Tango Prospect in the BIFs’ adjacent to the granite contact. No production records are available and it is assumed that ore from the underground development was transported to the nearby processing plant at Mangote where high grade quartz veins were mined over 300m. At Mangote, on the other hand, records showed that the quartz veins reported up to 485g/t Au over 30cm. Recent diamond drilling at Mangote confirmed the high grades as well as the potential for a wider zone of mineralization than that mined by the Belgians as announced 26 April 2016.
The size of the soil anomalies at Douze Match and Mangote, current artisanal activity and the known history of Belgian mining at Mangote over approximately 30 years suggests the area has good potential to host a standalone operation. However, given the proximity to the Giro Prospect at Kebigada, the economic benefits may be greater for a central processing plant to process ore from any number of discoveries in the Company’s licence area.
The current plan is to confirm the source of mineralisation in the soil anomalies and to confirm the potential for broad open pittable areas of mineralisation similar to those at Kebigada. Historically the Belgians only concentrated on quartz veins which had to have a grade of more than 10g/t Au and did not pay any attention to any lower grade mineralisation in the wall rock.
The recent diamond drilling at Mangote confirmed potential for wall rock mineralisation at Mangote and we are expecting similar results from Douze Match. Should we be successful in defining the mineralised structures which sourced the gold in the area, follow up conventional RC and diamond drilling programmes will be planned to define potential resources in the area.

openbriefing.com
With such a large tenement package and with artisanal workings that are visible for many kilometres, how have you been prioritising the exploration programme across the greater Giro Project? Do you have a target resource that the company would like to achieve from the current activities at Giro?

Exploration Manager Mark Gasson
Our initial focus was to understand the mineralised potential of the areas mined by the Belgians knowing that they were focused on mining high grade quartz veins. For example at Giro itself the Belgians mined the high grade quartz vein and laterite which averaged around 1g/t Au at what is now our Kebigada Shear Zone target. A similar setting exists at Mangote as confirmed during the recent diamond drilling programme where a broader zone of mineralisation than that mined by the Belgians was identified. Previous explorer, Barrick Gold, also flew an airborne magnetic and radiometric survey over most of the Giro Project area in which they identified a 30km structural corridor which transgressed both tenements. Many of the Belgian mined areas and artisanal workings were within this corridor which was prioritized during subsequent soil sampling programmes. The result of this was the identification of 3 areas of gold anomalism at Adoku, Giro/Peteku and Douze Match/Mangote.
Our view is that given the project location in North East Democratic Republic of Congo, a successful mining operation at the Giro Project would require scale in the order of  3-5Moz at a grade of 2.5-3g/t Au.   The proximity of the Giro Project to Randgold Resources’ 17-million ounce Kibali group of deposits, lying within 30km of Giro, provides encouragement for the view that other large gold deposits could be discovered in the proximate area. 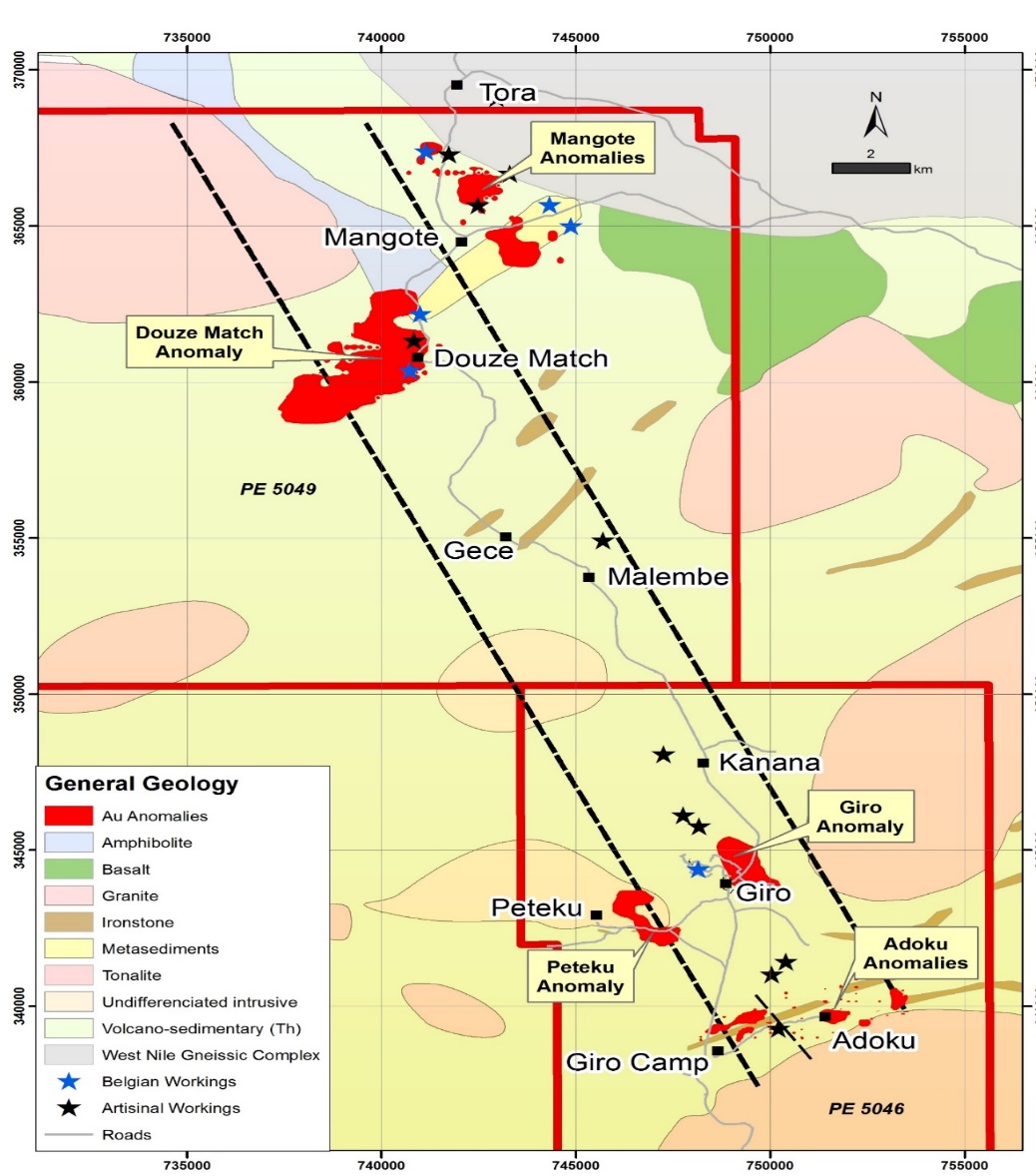 openbriefing.com
In your opinion why has the Moto Greenstone Belt been under explored through the past gold cycle, given the historic production by the former Belgian colonial managers? How much gold do you estimate they produced from the easier, near surface operations?

Exploration Manager Mark Gasson
In my opinion this is the first time since the end of Belgian rule that proper systematic exploration has been carried out over the Giro Project and the prime reason why the belt is underexplored. There has also been a change in focus on what explorers are looking for today as opposed to historically where all the focus was on alluvial mining or mining of high grade quartz veins.
Present day companies focus on discovery of large open pittable lower grade targets. Up to three years ago all exploration was focused on the Kibali licences with very little systematic work done on the area to the west of this area even though it was known that Belgians mined deposits at Moku, Beverendi, Giro and Wanga for example.
There are few or no records of the quantity of gold produced during Belgian rule but what is known is that enough gold was mined to sustain at least 30 years of gold mining in the area.

openbriefing.com
Can you discuss the style of the gold mineralisation and the geology in terms of the upper close-to-surface mining that has occurred and still is underway by hand, and the deeper ore that you are uncovering through recent drill programs?

Exploration Manager Mark Gasson
A number of styles of mineralisation have been identified at Giro. High grade quartz veins were mined historically by the Belgians and recently by artisanal miners in granites at Peteku and Douze Match and volcano-sediments at Giro, Mangote, Kai-Kai and Douze Match. At Kebigada mineralisation is within broad highly silicified and sheared volcaniclastics where mineralisation is associated with quartz stringers, veinlets and sulphides. All mineralisation identified to date extends from surface to depths exceeding 250m. Artisanal miners at Kebigada have not been successful in mining the in-situ material with all their focus being on recovering gold from laterites overlying our main target at Giro.

openbriefing.com
Bottle roll testing has been encouraging from small samples thus far. Is there indication of the type of recovery that you are expecting from the Giro mineralisation?

Exploration Manager Mark Gasson
Although only a limited number of samples were submitted for bottle roll analysis, recoveries averaged around 85% with two samples reporting higher than the results from fire assay. Discrepancies could also be a result of a nugget effect. We have not identified any arsenopyrite or other potential minerals with capability of locking up gold which is mostly associated with pyrite and minor chalcopyrite and are therefore fairly confident of decent recoveries at Kebigada. The same goes for the other high grade veins where gold is visible or associated with pyrite.

openbriefing.com
What is the exploration plan and strategy for Giro over the coming quarter and does Burey have sufficient funding to meet its current and near term plans?

Exploration Manager Mark Gasson
Shallow RC drilling programmes will be carried out at Douze Match and Mangote to identify the underlying source of the soil anomalies. Our field geologists are also doing detailed logging of the diamond core from Kebigada to better understand the dominant mineralised orientations. High grade mineralisation appears to be associated with a roughly west-east orientation. A number of RC holes will be planned to intersect this orientation which is oblique to our current drill direction and will hopefully improve the grade at Kebigada. Burey recently raised A$3m and the Company has clearly demonstrated its capacity to raise funds periodically for the highly prospective Giro Project.

Competent Person’s Statements – Exploration Results
The information in this report that relates to exploration results is based on, and fairly represents information and supporting documentation prepared by Mr Klaus Eckhof, a Competent Person who is a member of The Australasian Institute of Mining and Metallurgy. Mr Eckhof is a director of Burey Gold Limited. Mr Eckhof has sufficient experience that is relevant to the style of mineralisation and type of deposit under consideration and to the activity being undertaken to qualify as a Competent Person as defined in the 2012 Edition of the “Australasian Code for Reporting of Exploration Results, Mineral Resource and Ore Reserves”. Mr Eckhof consents to the inclusion in this report of the matters based on his information in the form and context in which it appears.

The information in this report that relates to the Giro Gold Project has been previously reported by the Company in compliance with JORC 2012 in various market releases, with the last one being dated 19 May 2016. The Company confirms that it is not aware of any new information or data that materially affects the information included in those earlier market announcements other than the exploration results that are the subject of this report.

Other Open Briefings in the Materials Sector 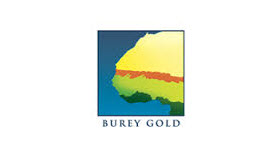